Police helicopters are a must

The article below first appeared in Westminster Extra. Nickie writes a monthly column for the paper.

Westminster has once again been the centre of protests with Extinction Rebellion organising five days of protests. Many of you will have experienced road closures and seem scores of police officers taken off normal duties and positioned in and around Parliament Square. The police also rely on helicopters to gather intelligence of protester activity. Due to the length of the protests - often for 6-8 hours - the helicopter flies above and often will idle in the sky for hours on end. Local people have been in touch with me to complain about the hours of noise and vibrations. It’s also the environmental damage idling helicopters do which is rather ironic when police protests on climate change!

The helicopters are making many people’s lives a misery. The disruption is also causing issues for the increased number of people currently working from home. Whilst I recognise the right to protest, the length of protests is becoming a problem for many local people and businesses having to live with constant helicopter disruption. My mailbag has been full of complaints households about the ongoing use of helicopters to police the protests.

I wrote to the Metropolitan Police Service Commissioner, Cressida Dick, earlier in the summer to highlight the issue and ask whether drones could be considered as an alternative to helicopters. I received a very sympathetic response which acknowledged the problem but explained that drone technology was not yet advanced enough to help police protests.

Following the weeklong XR protest and now regular weekend anti lockdown demonstrations I received even more complaints. I therefore arranged to meet the Policing Minister, Kit Malthouse, to discuss the issue and explore solutions. He confirmed that in the short term, police helicopter noise is unavoidable when protests take place. The Minister agreed to talk to the police about communicating with those impacted as to when helicopters are is use and why.

I was also fortunate to secure a meeting with Deputy Commissioner, Sir Steve House to discuss the problem. The Commissioner herself popped in to reiterate her sympathy for the fact local people are having to live with the protests and the helicopters. It was a very constructive meeting and Sir Steve presented me analysis of helicopter use over the last few years.

Interestingly helicopters have been used less this year than in previous one. Closer investigation of the data revealed that in past years the helicopters have been used for one of operations e.g. tracking a stolen car and hence it’s up for a short period but more often. This year it’s been used on fewer occasions but for much longer and thus it comes across as more disruptive as we hear it for hours. Sir Steve also revealed that the Met is looking at the use of drones and believes they will be compatible with policing protests eventually but not for some years. The cameras need to be of a particular high quality and drones big enough to carry them. There are pilots and research currently being undertaken.

Although this means we will have to live with helicopters for some time to come I am pleased that both the Met and the Minister recognise the problem and are keen to find a resolution. I have asked to be kept informed of developments in the drones pilots and technology advances.

I regularly meet with senior officers from the Metropolitan Police and I will continue to raise this with them and hope that the organisers of future protests appreciate the detrimental effect their actions can have on local people.

If helicopter noise has caused any issues for you, please let me know at: www.nickie.news/helicopternoise 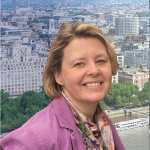