You and Yours: Cracking Down on Candy Shops on Oxford Street

BBC Radio 4 You and Yours reporter Melanie Abbott discussed how the Council is cracking down on candy shops on Oxford Street, with the Leader of Westminster Council, Rachael Robathan.

If you walk along one of the UK's premier shopping streets, Oxford Street in London, you'll see it's rather lost its glamour. Among the fashion shops there are now dotted about a series of sweet shops, all selling much the same thing. Westminster Council says there are more than 20 stores all with similar names and all not paying business rates. In total, the council is owed £5.4 million. Melanie Abbott met the Leader of the Council, Rachael Robathan.

So we're walking down Oxford Street, having a look at what's on offer here and what you immediately notice is the number of candy stores now proliferating all the way down. They're all offering the same thing. Very, very few people actually in the shops buying anything, all offering exactly the same thing. We're standing outside one now called Candy Shop, The House of American Candy. And as we look at it, the windows are piled high with all kinds of sweets. Cheetos, I think I've heard of those. Goldfish Original. Jolly Rancher. Nerds. Have you tried any of these?

No, I haven't. It does take my breath away because now we're walking along one, two, three shops to the next corner and yet another one.

Yes, we're just approaching the HMV site here, which only just has become a candy store. This was such an iconic store. And you can still see the famous little dog looking into the gramophone. Look at this really cheap signage, tatty looking offering inside. This is not adding to the attraction of Oxford Street.

Many sweets sold are twice the price or more than the supermarket. A box of After Eight is £7.99. The usual price, £3. Westminster Trading Standards say they're investigating complaints about inflated prices, out-of-date food and counterfeit products. Councillor Robathan says these shops are proliferating because the landlords are having trouble finding tenants and there's an incentive to rent them out as soon as possible.

We are. One, it's particularly bad here, it's happening across other areas of Westminster. It's something we've been talking to Government about. Something needs to be done.

The council says it's tried to bring court action against the stores, but finds companies are dissolved quickly or liquidated, leaving a long line of creditors. Martin Hinckley, the Director of Revenues and Benefits at the council, has the job of chasing the money. We're often given shell company names or false information. The bottom line is to try and follow the money trail. The key will be when we can trace where the money's going.

He says many businesses dissolve without ever filing accounts with Companies House. The council hopes to work with HMRC to establish which businesses have assets. Business rate collection is 7% down on a normal year, compounded by suspending all recovery action during the pandemic. The shortfall doesn't just affect Westminster. The vast majority of Westminster's business rates is redistributed across the country. So, I mean, we've got about a £5 million debt at the moment. That's £5 million that won't get redistributed across the country.

Let's not get run over by these cyclists. Back on Oxford Street, as we walk past sweet shops with few or no customers, the Leader of the Council tells me she can't understand their business model. If you look at these stores, there's no obvious activity in terms of people buying anything. What's stopping you just saying to the owners of these stores, look, don't rent to these sweet shops, these souvenir shops, because they don't pay their rates?

We are doing exactly that. Last week we wrote to Savills the letting agency. I have also spoken directly to a number of the freeholders and long leaseholders of these premises. We're seeing Oxford Street being taken over by these low-quality shops. This is going to have a really significant long term impact on Oxford Street's position as an attractive centre for retail and a place that people want to visit.

Savills the letting agency told me things will improve. Different tenants are coming forward. Marie Hickey is the Director of the Commercial Research team. Vacancy rates actually fell in the first quarter of this year, so it's currently at 13.5%, which is still high but is down on the 17% we saw in quarter three of last year. We're starting to see international tourists return and with Crossrail soon to open, that will help to drive that improvement on Oxford Street and the whole of the West End. The retail climate is the same everywhere at the moment. Why don't we see these kinds of problems everywhere? Because some streets are thriving. Regent Street for instance, is just around the corner. Rates on Oxford Street West, are significantly higher than what we see on Regent Street and on other streets, could be 30% higher. But also listed building consent also comes into play. So if your building is listed as many of the properties on Regent Street are, if your retail unit is empty, you're not required to pay business rates as the landlord.

We asked all the sweet shops on Oxford Street about the allegations of not paying their rates and about bringing down the tone. Only the Kingdom of Sweets, which has been there since 2007 answered, saying they work hard to pay all their bills. One store claimed business rates were down to the managing agent, refusing to tell me who that agent was. The council told me many stores are uncooperative.

The real concern is that there's other activity that's driving this, that's going on behind this that is of deep concern right here in the centre of London.

Before the pandemic, you wouldn't have seen this kind of thing. Maybe there were a few tatty souvenir shops up at the top end but nothing like the number there are here.

The switch towards online was exacerbated by the effect of the pandemic. There have been empty premises and I suppose if you're a long leaseholder, you are looking for a way of rather than paying business rates on your empty premises, what do you do? But it's a short term and really unwise decision in terms of the long term value of their investment. 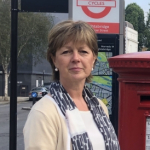 Supercars, fast and noisy cars and motorbikes. Nickie Aiken, Member of Parliament for the Cities of London & Westminster, hears too often from local people across the constituency about the plague many cause in neighbourhoods.