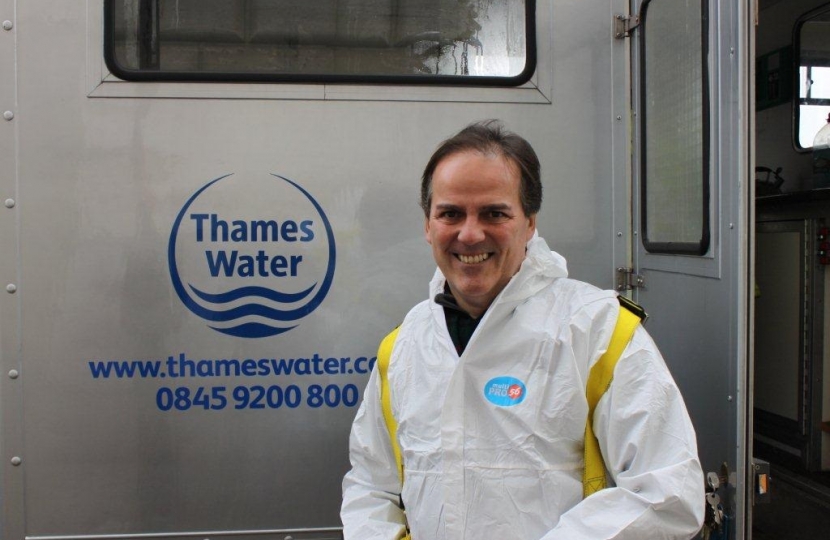 As a guest of Thames Water, Mark descended into the 150 year old Fleet Sewer which covers the River Fleet and is one of London’s largest lost rivers running from Hampstead Heath to Blackfriars.

The sewer was built to enclose the Fleet after parliament relaxed the controls on the disposal of human waste into the river in 1815 causing the water quality to deteriorate rapidly and smell terribly.  The state of the Fleet was blamed during that time for several outbreaks of disease including Cholera. The creation of the Metropolitan Board of Works in 1855 led to a transformation of the Fleet into its now enclosed form. The three northern intercepting sewers, designed by Joseph Bazalgette, all link in to the Fleet Sewer which discharges into the Thames under Blackfriars Bridge.

Mark took the opportunity to raise constituents’ concerns surrounding the cost of the supersewer that has been proposed by Thames Water. The Tideway Tunnel, as it is known, has been proposed to run under the Thames to stop raw sewage flowing into the river when the sewer system becomes overwhelmed following heavy rainfall. This 20 mile tunnel comes at a substantial cost and it is estimated that it will add nearly a quarter to the cost of the average bill of a Thames Water customer.

Mark believes more of the base cost could have been absorbed by Thames Water if they held on to a greater proportion of their profits instead of paying out 80% in dividends. However, he accepts that an infrastructure project as ambitious as this must ultimately be backed by government otherwise Thames Water’s credit rating would simply fall through the floor.

In the first quarter of the year Thames Water are due to submit the planning application for the Tunnel which will be reviewed within a year by the National Infrastructure Directorate whose recommendation will be passed on to ministers to reach a final decision on the project. For further information please visit the following website – www.thamestunnelconsultation.co.uk.