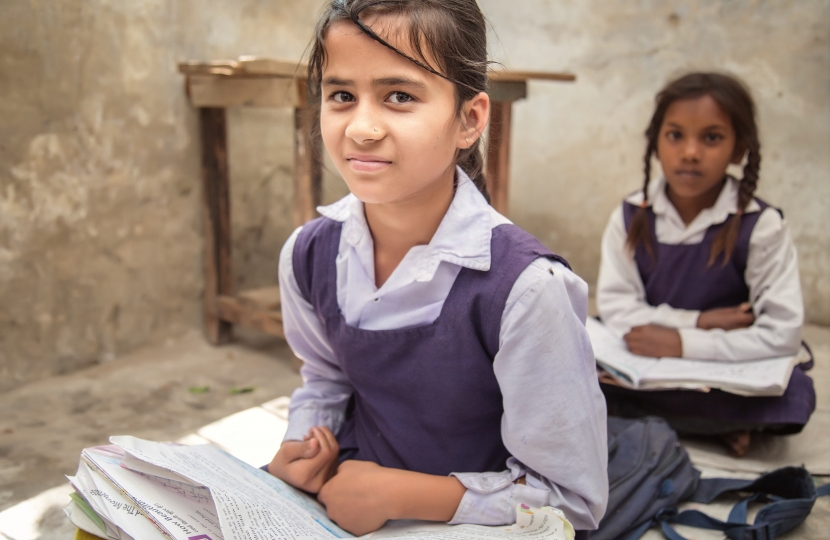 Cities of London & Westminster MP Nickie Aiken wrote the following article as part of a paper by One Nation Conservatives on 'Global Britain and Development'. The paper was put together by Anthony Mangnell MP with contributions from Nickie and five other Conservatives, including two former Foreign Secretaries. You can read the whole paper here.

Even before COVID-19, the world faced profound geopolitical, economic, and environment change. The USA is inward looking; China is undertaking an assertive foreign policy agenda and Russia is continuing its hostile stance towards the West while the UK seeks to re-establish itself as a nation free from the restraints of EU membership. As international bodies appear weaker against these growing national interests, democracy and fundamental basic human rights are under increasing threat. This leaves girls in developing countries more at risk of losing their hard-fought freedoms than ever before.

Under the Convention on the Rights of the Child, established in 1989, every child has the right to a quality education. Sadly 263 million children around the world remain out of school with twice as many girls as boys never even beginning an education. According to UNESCO estimates, 130 million girls between the age of 6 and 17 are out of school and 15 million girls of primary-school age — half of them in sub-Saharan Africa — will never enjoy a single day in a classroom.

The importance supporting strong education worldwide is one of the merger of the Department for International Development and the Foreign and Commonwealth Office should be welcomed. For far too long a disconnect had grown between our foreign policy aims and international aid objectives. The newly formed Foreign, Commonwealth and Development Office is now perfectly set to provide big, brave and bold goals to make a concerted effort to improve the lives of the world’s poorest and ensure our national interests are also protected.

The new department should start by continuing with DFID’s outstanding and respected Strategic Vision for Gender Equality and specifically place the championing of girls’ education at its heart. It should also hold governments in developing countries to account on their commitments to ensure their girls are properly educated and consider withholding aid if individual governments fail to take reasonable action to achieve this.

Going beyond this, the new FCDO should prioritise action in the following areas to promote gender equality:

Tackling the heinous practice of child marriage must be a critical objective in improving the lives of the world’s most vulnerable. ActionAid estimates that 250 million women living today were married before they reached 15. Child brides are less likely to finish their schooling and are often drop out of education before those who marry later. This has known knock on effects for the education and health of their own children, as well as the family’s health and financial well- being. It is estimated that more than 41,000 girls under the age of 18 marry every day.

Ending this practice would help increase women and girls’ expected educational attainment and improve their potential job opportunities. I believe it would also likely help in addressing violence against girls and women which is often linked to such practices as child marriages.

One action the Government could consider taking is using their new Global Human Rights sanction regime to target the terrorist group Boko Haram - whose name translated means “Western education is forbidden" - and their backers in Nigeria. Infamous for their kidnapping of girls from schools in 2013, the group continues to kidnap girls and force them into marriage in Nigeria and other parts of North West Africa.

Ending child marriage is one thing but the practice is deeply embedded in many areas of the world and we won’t persuade more families to send their girls to school unless some of the major societal norms and deep-rooted outdated beliefs are confronted head on. There is a connection between the low value placed on girls and the desire to control them and particularly their sexuality and lack of support for a girl’s education with many of the poorest and most conservative communities in the world.

One of the most significant ways to begin to question and change these mores is in supporting programmes that target boys and men to be a part of discussions about cultural and societal practices and demonstrating the importance to a family’s economic and general well being if their women are properly educated. The FCDO must support a softly softly approach funding flexible school timetables and a curriculum that begins with the basics and is relevant to their daily lives. In the most traditional of communities classrooms may have to be within the village setting to build families and elders with the confidence that educating girls will benefit the whole community.

The Government could also focus on championing the role of women peacekeepers. Women peacekeepers are better able to access populations in communities with outdated values, interviewing and supporting survivors of sexual violence, generating critical information which would otherwise be difficult to reach. Furthermore, they can serve as powerful mentors and role models for women and girls in post-conflict settings helping to challenge outdated values. While women now account for 6% of deployed uniformed personnel, up from 1% of in 1993, more remains to be done and the Government should encourage countries across the world to recruit more female peacekeepers.

Preventing child marriage and addressing society norms are all very well and important but poverty remains an important factor for determining whether a girl can access an education. For many girls in the poorest communities, families chose to marry them as young as possible for the dowry they will attract and having one less person to feed. They are little more than a commodity.

If more families are to be encouraged to send their daughters to school the education must be free or cost very little. FCDO can help by continuing to fund teachers, particularly qualified female teachers, and scholarships; reducing the distance to school by building more of them even in the most isolated of places. Thought should also be given by the FCDO in new innovative ways of paying families a dividend or such like to allow their daughter to attend school to make up for the loss of a dowry or work they may undertake to support the household income.

Investing in girls’ education creates a ripple effect: educated girls tend to delay their first pregnancies, have healthier children, earn more income for the family, and are far more likely to send their own children to school. The result: better off families and communities.

The benefits of educating girls speak for themselves with positive effects carrying on from one generation to the next. Research suggests that a child born to a literate mother is 50 percent less likely to die before the age of 5 and every extra year of education is estimated to increase a girl’s earning power by 10 to 20 per cent. The benefits for a country’s economic growth is also unquestionable: The World Bank calculates that a 1% increase in female education raises the average gross domestic product (GDP) by 0.3% and annual GDP growth rates by 0.2%.

The UK is already providing lifesaving and life changing relief for girls in developing countries and those displaced in the ever-growing refugee camps across the world. Save the Children research reveals that four million refugee children across the world are out of school and missing out on their right to an education due to displacement, poverty and exclusion.

By considering some of the recommendations of this report, the FCDO can continue the world-leading work of DFID in promoting gender equality, providing girls in developing countries with the education they deserve, and secure our country’s standing as an international development superpower.