We are delighted to be joined by Dr. Liam Fox MP at 6pm on Monday 6th July.

In June 1993, Liam was appointed Parliamentary Private Secretary to Michael Howard, then Home Secretary. In July 1994, he was appointed an Assistant Government Whip, and promoted to the position of Senior Government Whip the following year. He was a Minister at the Foreign and Commonwealth Office from 1996 until the 1997 General Election. 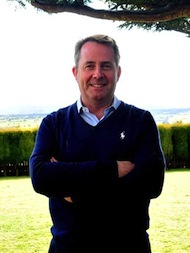